Dear Mr. Vice President,
You are facing an enormous task by leading to find a “cure” for cancer. I am very glad this long
overdue research has found some priority again with you in charge. Hope lies with you.
Needless to say cancer medicine has not progressed much since chemotherapy. Maybe there is a reason for the long lasting stagnation, which could be that past research is searching in the wrong place.

Thanks to genetic and epigenetic advanced research, we know that methylated gens are the culprit for many illnesses. The most logical approach would be to “de-methylate” inherited and epigenetically altered genes. After all, a healthy gene will not produce cancer.
Very little is known about the malfunction of the endocrine system as a potential gene degenerate. High adrenalin (cortisol) output over a long time, lack of serotonin and/or reduced oxytocin receptors playing into the methylation of genes. As we know now, IL (Interleukin) is the culprit for many devastating illnesses, though we don’t yet know where IL comes from and how inflammation causes genes to methylate and consequently malfunction, paralyzing the on/off switch. Is IL (lnterleukin) and endocrine system intertwined and produces a faulty gene expression? I believe so.
Research shows, a single methylated gene (Gadd4sa) generates: tumorigenesis (Cancer cells),
reproductive system, renal/urinary system, nervous system, mortality/aging, immune system,
integument, homeostasis metabolism, endocrine exocrine gland, cellular system [1].
What we know for sure is that stress, permanent fear, trauma, infections, or chemicals can trigger a gene’s failure.

We must ask: Are children born with a latent imprint of a dysfunctional or damaged endocrine system and why?
For example, stress: The moment the hypothalamus is forced to produce adrenaline, due to permanent stress/fear or trauma, the anterior endocrine gland (pituitary gland) becomes overactive and releases high amounts of adrenaline (cortisol, among 7 different hormones) while the posterior pituitary gland remains inactive. The posterior pituitary gland however secretes ADH and oxytocin, important to calm the person or even the fetus in a pregnant woman. If the interaction between oxytocin receptors is disrupted, gene methylation can begin and this genotype is not only associated with postpartum depression in women, it also affects the fetus.
One other question is not answered yet: Is there carelessness due to providing medication such as antidepressants, antibiotics or opioids to pregnant woman? How often are unnecessary C sections performed, where mother and child are exposed to chemicals that we don’t yet know in terms of their long-term affect? How often do doctors freely hand out medication to children without knowledge of the lasting consequences? Are over-medication and chemicals in early life weakening the immune system and becoming contributors to cancer?
Research also provides the fact that children, who were sexually abused, then live with permanent high cortisol levels. Over long periods, high cortisol alters the immune system and consequently genes. [A]
Up to now medical professionals treaded symptoms and overlooked the source.
Instead, for diagnosis, which is too often now wrong at first, in the medical and psychiatric field,
doctors could use DNA-testing for potentially sick patients, as a primary lead.
When patients seek doctors for chest pain they reveal only the immediate symptom and a diagnosis is geared toward this one symptom. Would a DNA test be available, physicians could see the bigger picture.
One DNA test will point out high risk Markers for existing illness and provides in addition alerts for ineffective or even harmful medication. A DNA interpretation database could be guide for doctors, psychologist and psychiatrists, explaining each patients potentially harmful Markers and providing treatment direction. Without a doubt it will reduce unnecessary MRls and XRs or RX, and in psychiatry, eliminates years of experimenting with unsuccessful and costly cognitive therapies or finding the right antidepressants for depressed patients. After all, a complete medical DNA test cost less than a prolonged search for a diagnosis.
The Institute of Molecular Biology in Mainz Germany found a way of DNA Repair and Reprogramming [2]. A joint effort could save time and money.
If science could find in addition the culprit(s) that methylate’s genes and find additional ways to
de-methylate damaged genes, we have won the greatest battle in human history, and not only against cancer. Furthermore we will learn from such research and inducible well educate society and provide preventative guidelines for future generations.
Mr. Vice President, I hope my letter is an encouragement to consider repairable genes as the future and hopefully prevent unnecessary lifelong suffering and repeatedly early death. 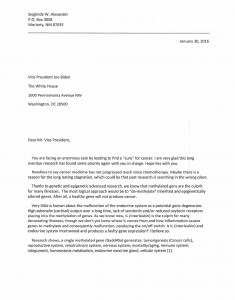