Dear Sieglinde:
Thank you for sharing your concerns about child abuse.

My Administration is committed to doing our part to prevent the conditions that can lead to abuse. We have implemented a comprehensive agenda that increases funding at the state level to ensure that maternal and child health programs include child protection and family preservation services. We have also worked with the Congress to pass laws that support child abuse prevention efforts in state and local jurisdictions. In addition I have signed legislation aimed at tracking sexually violent offenders and safeguarding our young people from them.

I also believe that children deserve a permanent home. The Adoption and Safe Families Act that I signed in 1997 reaffirms the importance of making reasonable efforts to reunify families, while also recognizing that the health and safety of children must underlie every decision in the child welfare system. It makes clear that when a child’s safety is at stake, states may move the child into an adoptive home or other permanent placement.

We must also work to eliminate all forms of forced child labor. That is why I have signed an Executive Order directing federal agencies to take steps to ban procurement of goods made by forced child labor. I remain committed to protecting children from this terrible practice and will seek the finds necessary to do so.

Government programs alone, however, cannot prevent child abuse. We must not only forge caring, cooperative alliances that include government as a partner, but also involve schools, communities, parents, and other family members. To encourage such partnerships, I have launched the Children Exposed to Violence the Imitative to assist states and localities in developing prevention and intervention initiatives. In December 1998, I announced the availability of $10 million for Safe Start grants, which will help get this effort underway and reduce the impact of violence on young children.

I am pleased to learn of your interest in this vital issue, and I encourage you to contact officials in your state for more information. 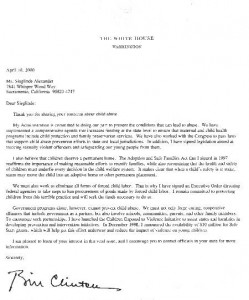